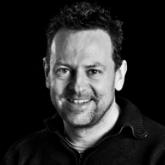 The channels, and more generally superoperators acting on the trace class operators of a quantum system naturally form a Banach space under the completely bounded trace norm (aka diamond norm). However, it is well-known that in infinite dimension, the norm topology is often "too strong" for reasonable applications. Here, we explore a recently introduced energy-constrained diamond norm on superoperators (subject to an energy bound on the input states). Our main motivation is the continuity of capacities and other entropic quantities of quantum channels, but we also present an application to the continuity of one-parameter unitary groups and certain one-parameter semigroups of quantum channels.